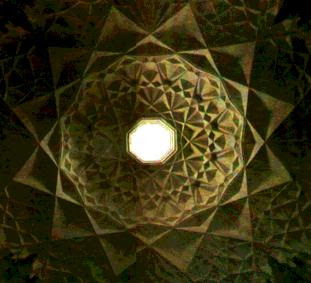 One of my favorite stories on the metaphysical comes from the Sufi tradition of Islam, one which I did not really understand until I had studied some of the Jewish Kabbalah, through which realization came the understanding that the mystics of various religious traditions, often shunned by their respective hierarchies, understand, respect, and share with each other truths to which more secularly-minded religionists are blind.  It follows:

One evening when the Caliph had called for a feast to be held for the wealthiest men in the Ummah, the top religious leaders, and emirs and sheiks from throughout the land, all the guests had arrived and were jockeying for the best seats when an old, eccentric-looking and dishevelled man wound his way through the dignitaries in their lavish attire and plopped down without ceremony in the highest seat of all.

Immediately, all these self-important individuals became incensed at the man's audacity, and demanded to know who he was, challenging him, "How dare you come here dressed in those rags and claim the highest seat? Who are you? You must at least be a noted mullah who has been in secluded study."

"No," replied the mystery man, a stern expression fixed on his face, "I am higher than that."

"Perhaps, then, you are a sheikh or an emir."

"Well, then, you must be one of the ministers."

"In that case, you are certainly the new vizier."

"There's no one in the kingdom higher than the vizier, except the Caliph; maybe you are he in disguise, playing a joke on your loyal retainers."

"No, wrong again; I am higher than that."

"That's impossible," the men cried out in exasperation, "unless you are claiming to be The Prophet himself."

Now the men began to be afraid, for the man appeared totally confident and sure of himself and of who he was. They asked again, meekly, "That only leaves...can it be...that you are Allah incarnate, the Mahdi come at last?"

The man shook his head, "No, I am even higher than that."

Now the men gaped in astonishment and indignation at his absurd statement. "But nothing is higher than Allah!".

At last, the mystery man smiled.

"I am that Nothing."


Postscript: 'Twas not until I'd studied a little Kabbalah that I truly understood this story.  In Kabbalah, above the Tree of Life there are three "veils": the Veil of Limitless Light, the Veil of the Limitless, and the Veil of Nothing.
Posted by Chuck Hamilton at 06:58