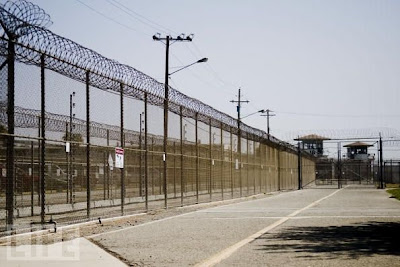 This essay is based on an editorial I wrote for the Chattanooga Times-Free Press in January 1999 and a letter to the editor I wrote in April of the same year, both of which were published. Having been written two years before the opening of America's own Evin at Gitmo (Guantanmo Bay), this essay doesn't include references to there, or to its own Kahrizak at Abu Ghraib, or to the torture center at Bagram Air Base in Afghanistan. But everything it says still applies to the current judicial and penal system in the United States of America.

One of my favorites heroes is Thomas Paine, godfather of both American Independence and the French Republic, as well as philosophical patriarch of modern English, Irish, and Scottish republicanism. As his French epitaph reads: "English by birth. American by choice. French by adoption. Citizen of the world."

Paine was a patriot, a lover of freedom, and a staunch advocate for human rights of even the lowest of society, and he would be horrified at the criminal judicial and penal systems in this country today and the routine abuse of human and civil rights that takes place throughout them.

Paine ends his “Dissertation On first Principles Of Government” with a warning: “An avidity to punish is always dangerous to liberty. It leads men to stretch, to misinterpret, and to misapply even the best of laws. He that would make his own liberty secure must guard even his enemy from oppression; for if he violates this duty he establishes a precedent that will reach unto himself.”

Those words are a message to the predators who advocate ever harsher treatment and abuse for those convicted of criminal offences as well as a call for vigilance to we who stand for freedom and humanity in opposition to them.

Our country is rapidly on the way to becoming what President Reagan characterized as a "moderately repressive authoritarian regime". Not only are we the only industrialized nation to maintain the death penalty, but we have the highest prison population per capita in the world, higher even than Communist China or the Soviet Union at the height of the Gulag.

Harsh mandatory sentencing laws and imprisoning people for life after three or even two felony convictions have greatly overcrowded our prisons and jails, and the answer we are given to the question? Build more prisons.

Of males between the ages of 18 and 44, one-fourth—25%--of all African-Americans, one-sixth of Latinos, of one-twentieth of non-Latino Caucasians are somewhere in the prison system. The female population of prisons is the system’s fastest increasing demographic.

Incarceration alone is dehumanizing enough, but lately it is being made even more so, and deliberately.

Programs to help offenders go straight (and therefore make society as a whole safer, promoting the interest of the general welfare) are being eradicated.

Chain gangs (originally designed in the post-bellum South to take the place of slavery) engaged in pointless, humiliating activities are again a feature of our penal system.

Prisoners work for outside commercial businesses and receive pittance wages.

“Control units” based on the model at Marion Penitentiary are used to break political prisoners.

Facilities in Texas, Louisiana, Arizona, Georgia, and other states have no air conditioning or heat; the free-enterprising Texans sell inmates fans and thermal underwear.

Arizona houses overflow inmates in tents outdoors surrounded by barbed wire, following the example of the Nazis who built Dachau for the same reason: an overabundance of prisoners.

The most obnoxious feature of all of this is the private prison corporations which eagerly profit from this misery at nearly twice what it costs states to house inmates and which have much incentive to keep more prisoners housed for longer.

In addition to these violations against the least pitied members of our society, there are onslaughts against out common civil rights and liberties.

Our rights to be free from unreasonable search and seizure and from unwarranted invasions of our privacy have been seriously weakened.

“Seizure of assets” takes place before or even without convictions, sometimes from a third party.

Anyone crossing the U.S. border is liable to be strip-searched at random by the Customs Service with little or no probable cause.

The Constitution’s prohibition of double-jeopardy, which states that no person shall “be subject for the same offence to be twice put in jeopardy of life or limb”, has become a pathetic joke with the increasing use of laws at different levels of government to retry (in the case of an acquittal) or again try (for double punishment in the case of a conviction at first trial) accused persons for the same crime or crimes.

In a case involving officers who rubbed pepper spray into people’s eyes, Federal Judge Vaughn Walker ruled that it is legal for police to torture into submission nonviolent protestors who passively resist.

Police officers who abuse detainees and otherwise misuse their power do so with the knowledge that they are safe behind the blue code of silence, that “border that shouldn’t be crossed” (too bad all our patrol cars can’t carry Explorer Scouts*), and in case of actually having to go to court have a complacent public to back them up.

Even in the most egregious of circumstances, like firing 41 shots at a man trying to produce the ID demanded of him, firing 63 shots at a suicidal man aiming a shotgun at himself, shooting down an off-duty policemen who was RWB (running while black), or viciously and savagely beating a man they have surrounded and completely in their control with the beating caught on videotape.

This is not what could happen in some Kafka-esque future, this is happening NOW, in today’s America. The bully mentality that advocates these assaults on our freedoms is the same that produces child abuse, hate crimes, and all other forms of tyranny.

The fact that even the President of the United States (Bill Clinton in this case) has been a victim of this trend does not mitigate the fact that almost all its other victims have been the working class, the minorities, the poor, the tired, the huddled masses yearning to break free, and others who have no voice.

As for capital punishment/state homicide, that neither deters crimes nor gives any real peace to families and friends of murder victims; it only creates yet more collateral victims in the loved ones of the condemned, who have themselves done nothing.

The sole purpose of capital punishment is to enhance the political fortunes and egos of government officials by demonstrating that the state has the power of life and death and can kill us if it wishes. That messages is not aimed at criminals; it is aimed at you and me.

A great American named Eugene Debs, founder of the Socialist Party of America among other things, once said, “Years ago I made up my mind that I was not one bit better than the most abject on earth. I said then and I say now that while there is a lower lcass I am in it, while there is a criminal element I am of it, and while there is a soul in prison I am not free.”

If this "long train of abuses and usurpations" is not checked, our entire nation will soon be a virtual concentration camp imprisoned by fear. We the People need to wake up to the fact that an injury to the least of us is an injury to all of us, and lend our voices to those who have none, before someone comes for us and there is no one left to object.

*In East Ridge, Tennessee, in 1999, an Explorer Scout doing a ride along with one of the city cops there wrote up a report of misconduct and abuse by the officer with whom he was riding. Because of this, the officer was first suspended then dismissed because the Scout would not give up.

"The Largest Prison Strike In American History Goes Ignored By US Media": http://www.deathandtaxesmag.com/41235/the-largest-prison-strike-in-american-history-goes-ignored-by-us-media/


"Pennsylvania Judge Sentenced For 28 Years For Selling Kids to the Prison System": http://blog.blacknews.com/2013/05/judge-mark-ciavarella-sentenced-selling-kids-prison-system101.html