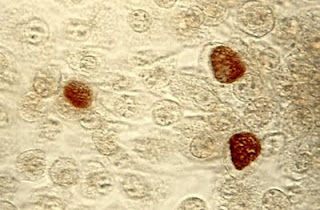 
Bacteria of the family Chlamydiaceae are Gram-negative, nonmotile cocci which are the only organisms in their order, class, and phylum of the kingdom Bacteria. First classified as protozoans, the chlamydiae (the collective term for species of the family Chlamydiaceae) were next considered viruses until analysis of their RNA resulted in their being assigned to the kingdom Bacteria.

Like viruses, bacteria of the genera Rickettsia, Coxiella, and some Mycobacteria, and protozoa such as Plasmodium, chlamydiae are obligate intracellular organisms, meaning they can only grow and reproduce inside a host cell.

Chlamydiae are incredibly small for bacteria: about 300 nm (nanometers) in diameter, not much bigger than viruses such as Poxviridae spp. (200nm x 300 nm), C. psittaci is 500 nm, while C. pneumoniae can range from 200 nm to 1 µm.

The family Chlamydiaceae is divided into two genera, Chlamydia and Chlamydophila. Of the three spp. which belong to the first genus and the six species which belong to the second, only three—Chlamydia trachomatis, Chlamydophila pneumoniae, and Chlamydophila psittaci—are important human pathogens. C. trachomatis is found only in humans (except for a variant which infects mice), while C. pneumoniae and C. psittaci are also found in other members of the animal kingdom, mostly among birds in the latter.

The six species of the genus Chlamydophila were originally assigned to the genus Chlamydia, but the discovery that glycogen is detectable in the three Chlamydia species while it is not present in the six of Chlamydophila, along with developments in genetic research that showed the RNA sequences of the two groups of chlamydiae share only 94.9% of identical genetic coding, led to the differentiation of chlamydiae into two separate genera.

Chlamydiae of both genera differ from other members of the kingdom Bacteria in their unique biphasic lifecycle. Being obligate intracellular organisms means they must live in eukaryotic host cells in order to grow and multiply, infecting columnar and squamnocolumnar epithelial cells.

Though the genera of the Chlamydiaceae family share that trait with at least five other genera of human pathogens, they are the only species of bacteria do so in two phases, first as an elementary body (EB) and second as a reticulate body (RB). The form of chlamydia which exists outside host cells is the EB, which is inactive metabolically yet infectious while the form inside becomes an RB, nonifectious but metabolically active.

Initially, the EB attaches to the host cell and is phagocytized or otherwise absorbed into the cell, where it converts to an RB in six to eight hours. After eighteen to twenty-four hours, the RB begins synthesizing nucleic acids and initiating replication by binary division, with its “offspring” metamorphosing into EB’s until reaching a point forty-eight to seventy-two hours after initial entry, at which time the host cell bursts, releasing the new EB’s to infect other cells.

During this process, chlamydial RB’s use ATP (adenisine triphosphate) from the host cell, rather than its own (which it can produce), and chlamydiae are thus referred to as “energy parasites”.

Chlamydiae differ from most other bacteria in another recently discovered and important aspect, that they evolved from ancestors in the Plant kingdom.

Like the genetic studies that demonstrated enough of a difference among chlamydiae to divide the original genus Chlamydia into two genera, research by scientists from the Rutgers School of Environmental and Biological Studies School demonstrated that chlamydiae, like cyanobacteria such as Rickettsia and Synechocytis spp., share protein markers with the chloroplast of plants and found plant-like genes in chlamydial species, in addition to similar methods of lysine production.

Further study by a team scientists led by Fiona Brinkman, Jeffrey Blanchard, and Artem Cherkasov shows that this did not result from horizontal genetic exchange as had been previously hypothesized but could only have resulted from direct evolutionary development.

The primary importance of this discovery to the clinical medical laboratory (CML) is its potential for the development of better, more specific methods of treatment of humans infected by various chlamydial species as well as means of detection of those organisms by CML professionals.

Chlamydia trachomatis is the organism in question when most laypersons hear the phrase “chlamydia infection”, although the phrase is accurate for infection of humans by any species of the Chlamydiaceae family.

Chlamydia infection is, according to the Center for Disease Control and Prevention (CDC), the most common of all STD’s in the U.S., showing a reported rate four times that of its nearest competitor, with 1,108,374 cases of chlamydia versus 355,991 cases of gonorrhea in the year 2007, or 70% of all STD’s; the CDC estimates the actual rate of chlamydial infection is four times the reported number due to the high percentage of asymptomatic carriers.

Clinical manifestations of infection by C. trachomatis include urethritis, trachoma (an eye infection, rare in the U.S.), genital infections, lymphomgranuloma venerum (LGV; an infection of lymph system, rare in the U.S.), oligoarthritis, skin lesions (keratoderma blennorrhagica, usually on the palms and soles, and balanitis circinata, a dermatitis associated with reactive arthritis), and conjunctivitis in adults, and conjunctivitis, pneumonitis, and pneumonia in neonatal infants.

The conditions or diseases that the patient exhibits depend on which of the fifteen serovars, or serotypes, of C. trachomatis with which he or she is infected. With adults, other symptoms diverge by sex, with epididymitis (inflammation of the epididymus), urethritis (inflammation of the urethra), and Reiter’s syndrome (an autoimmune syndrome also called reactive arthritis), in order of prevalence, predominating in men; though epididymitis is the most common, urethritis is certainly the more noticeable.

The type of urethritis caused by C. trachomatis in both sexes is called “non-gonococcal urethritis” (NGU), to distinguish it from that caused by gonorrhea, the reason being that treatment for the two is different, and because of the ease with which the difference is seen on slides of urethral samples taken from men.

In the case of NGU, the treatment is the same regardless if the condition is caused by the bacteria C. trachomatis, Ureaplasma urealyticum, Haemophilus vaginalis, or Mycoplasma genitalium, the viruses Herpes simplex or Adenovirus, or the parasite Trichomonas vaginalis; the treatment would only differ if the cause were due to something noninfectious such as a physical injury or chemical irritation.

In the 20th century, C. trachomatis was the leading cause of acquired blindness worldwide. According to figures from the World Health Organization (WHO), however, the rate of chlamydial-caused blindness has dropped to < 3% in the past decade.

Many patients infected with C. trachomatis remain asymptomatic, particularly in the case of women, where the majority are asymptomatic or have only mild symptoms. The infection can burn itself out in six months to a year, but can also, if untreated, result in serious complications leading to sterility, ectopic pregnancy, blindness (where chlamydial conjunctivitis is involved), and even death, especially in the case of neonatal infants.

Chlamydophila pneumoniae causes bronchitis, pharyngitis, sinusitis, and atypical pneumonia in humans, and has also been connected to Alzheimer’s disease, atheroschlerosis, and asthma, though connection to the latter group of conditions is not yet conclusive.

In addition to humans, C. pneumoniae is found in Koalas and some reptiles and amphibians. Transmission can occur zoonotically, but in humans is usually contracted from droplets of infected persons.

Chlamydophila psittaci causes psitticosis, also known as parrot’s disease, in humans, and its etiology is almost always zoonotic; it can also cause meningopneumitis, conjunctivitis, abortion, endocarditis, and hepatic and renal failure.

Infection by C. psittaci is especially prevalent among birds, and can effect domestic farm animals as well; farm and slaughterhouse workers, pet bird owners, zookeepers, and veterinarians are the most vulnerable humans. Symptoms and conditions range from mild illness to severe pneumonia, athraglias (joint pain), diarrhea, epistaxis (nasal hemorrhage), and leukopenia. In more severe cases, meningitis, endocarditis, hepatitis, myocarditis, keratoconjunctivitis, and encephalitis can occur. Infection of humans is rare, with only about fifty cases in the U.S. per year.

Diagnosis of chlamydial infections in the CML can be accomplished with cell or tissue cultures. Since chlamydiae are obligate intracellular organisms, they will not grow on artificial media, so McCoy human cells or 7-day old chick embryos are used.

Giemsa staining (in which chlamydiae are basophilic) and iodine staining are also used. Regular Gram-stain procedures can be used to diagnose NGU in men, particularly those with a discharge; the PMN’s in gonorrhea have obvious inclusions which are absent in non-gonococcal cases. Chlamydial LGV is usually diagnosed serologically, with a titer of >1:64 considered sufficient for a diagnosis, with a titer of 1:256 being the strongest confirmation and a titer no higher 1:32 ruling it out; titers are also used in cases of perihepatitis, infant pneumonitis, and PID.

Specimens for cultures include swabbings, scrappings, and small tissue samples of effected areas (urethral swabs must be deep to avoid interference from other organsims), which need to be transported in special media for suspected chlamydial organisms, and processed immediately. If not processed immediately, specimens need to be refrigerated, and if the processing of a specimen cannot take place after more than twenty-four hours, it should be frozen at –70° C.

Specimens for suspected infections of C. psittaci are usually respiratory sputum. Extreme caution needs to be taken when handling and processing specimens suspected of containing live chlamydial infectious agents, which are a major cause of laboratory-acquired infections, especially with suspected C. psittaci, which is particularly hazardous to handle.

For the NAAT’s and non-NAAT’s, one advantage is that neither sets of tests require (but can use) live organisms, and, in the case of NAAT’s, the test can be run from a urine specimen.

The preferred treatment for C. trachomatis infection is azithromycin in a single 1 mg oral dose in the office, with doxycycline 100 mg twice a day for seven days as the second preference; alternatives are regimines of erythromycin, erythromycin ethylsuccinate, ofloxacin, and levofloxacin.

The preferred treatments for C. pneumoniae is doxycycline, as it is the most effective in the case of that pathogen, though azithromycin and clarithromycin are also common; occasionally drugs such as levofloxacin may be used, but are not as effective.

The preferred treatment for C. psittaci is a regimine of tetracycline or choloramphenicol.

The symptoms of secondary conditions such as Reiter’s syndrome can be treated with nonsteroidial anti-inflammatory drugs (NSAIDS). Chlamydial conjunctivitis does not respond to normal ointments and the only recommened treatment is the oral medications.

thanks for this information,Chlamydia can infect both men and women and can cause serious, permanent damage to a woman's reproductive organs.

Under ordinary conditions, dating is a challenge. For people with genital herpes, it becomes a lot more difficult. Psychological problems, including humiliation, worry about propagating the virus may keep individuals from reaching out, and anxiety about rejection. They might possess a lowered self esteem and withdrawal from dating totally. Chlamydia support groups are for finding companionship on excellent Chlamydia forums.

Thanks for sharing this information with us. It's very helpful for us.
Mitcham Cab | Mitcham Minicab | Mitcham Airport Transfer

I really like your Blog. Thanks to Admin for Sharing such useful information. Addition to this here I am sharing One more similar Story Symptoms, Prevention & Treatment of Chlamydia infection.