WHY I DO IT: Why I am so involved with Iran issues and the Iranian people 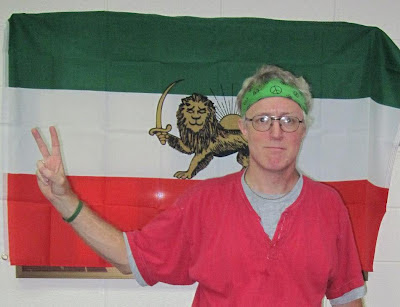 I have been asked many times why I am so interested in Iran, why I care so much about the Iranian people, why do I put so much time into supporting the green movement.  Even one of my longest-time Iranian friends whom I’ve know for over three years asked me that recently.

With everything that’s been going on the past several months and is still going on now, I never really answer the why because I have so many complex emotions about it that I am not sure if I know the full answer myself yet.  I can, and do, however, answer with the how.

At the time of the Iranian 1357 (1979) Revolution, I had been aware of events on and off for the past couple of years since I have always been an avid consumer of news.  I watched the events of the revolution and its aftermath unfold, then like all Americans found myself riveted to the Hostage Crisis.

During this time, I got my first job, at Ponderosa Steakhouse on Brainerd Road.  I was the dishwasher in the restaurant’s scullery, and was partnered with Mehdi Pourkesali, an Iranian college student from the city of Babol, which I had not heard of though then I know it well now, who was the steak cook; every shift I worked he worked also.  Even though most Americans were happily, or angrily, singing “Bomb bomb bomb, Bomb bomb Iran” to the tune of “Barbara Ann”, I went out of my way to reach out to Mehdi.

Upon learning he was unable to return home due to the hostage crisis, I got him to teach me a few words of Farsi so that maybe hearing them would make him a little less homesick. Since we were working most of the time, the conversations were limited to just a few words but I always liked to see his face light up.

Of course, there were also the few occasions when he called me up drunk and depressed, speaking rapidly in Farsi.  It was somewhat amusing but mostly heartbeaking.. The friendship, by the way, was two-way; it was my first job and Mehdi went out of his way to make me feel welcome.

I’d started in March of my junior year in high school which was also his second year at the community college.  After he graduated in June, he moved away to continue his education and I never saw him again.  Seven months later, the hostages were released, and I hope he got to go home at least for a visit to see his family.

In the years that followed, hearing news about the Iranian Cultural Revolution, the harsh repression of dissent, the crushing of the Left, the imposition of sharia, the Iran-Iraq War, the Iran-Contra Affair, and the student movement of 1999, I often worried about my friend Mehdi and hoped that he had managed to remain in the States.*

I kept up casually with news from Iran in those and later years, the mass murder of the Tudeh, the Mojahedin-e Khalq, and other leftists, the displacement of Ayatollah Montazeri, the rise of Ayatollah Rafsanjani, and other events.  But Iran did not really come back into focus for me until the events of 9/11.

I had been in the Philippines during the Baguio earthquake of 1990 and in the aftermath of that disaster, which collapsed numerous large buildings in the region, they found people buried in the rubble up to two weeks later.  With that memory, I held out hope (futilely as it turned out) for the same at the site of the World Trade Center. Because of this I was glued to the TV 20-22 hours a day.

One report that stood out vividly in my mind dealt with reaction around the world and the outpouring of sympathy.  The part that really caught my attention was about one million people holding a vigil in Tehran in support of the victims and their families (a number I’ve since learned was greatly exaggerated).  I felt pride in the citizens of my friend Mehdi’s homeland.

Then came Bush’s State of the Union address in January, and I was shocked and appalled to hear Iran named as one the the three members of the “axis of evil”.  That was the beginning of the belligerent propaganda coming out the neocon White House that helped put the final nails in the coffin of President Khatami’s reform program and bring to office Mahmoud Ahmadi Nejad with the illegal assistance of the Sepah (Revolutionary Guard) and Basij in his first stolen election.  This was a tragedy for the Iranian people.

In 2006, I joined my first social network, the now defunct Yahoo360.  After not doing much with it at all, I logged on one day to find a comment left by a female college student in Iran.  With an exchange of comments and mails on the Yahoo360 system, I’d made my first Iranian friend in over 25 years.

Through her, more followed.  The total number of my friends on Yahoo360 was never high, not more than twenty-five, but of those all were Iranian except two, and one of those was from Uruguay.  With my new friends I discussed history, Iranian poetry, even facts about Shia Islam, but never politics.  We even looked at each other’s poetry and other writings.  Although I was in my forties, they were all college-aged, (with one exception, a precocious high school student), but since I was in the process of working out a way for me to go back to college myself, in that sense we were peers.

All were reluctant to discuss their daily lives. I could sense, however, their frustration, their isolation, their loneliness.  The words in the first stanza of Springsteen's "Born in the U.S.A."--You end up like a dog that's been beat too much 'til you spend half your life just covering up--describe the impression I felt exactly.

There were two exceptions to not talking about politics.  One was, and still is on Facebook, a dear friend who had been out of university a few years and many times discussed his frustrations and cynicism with life in the Islamic Republic.  The other is Atieh Bakhtiar, one of my dearest friends ever, to whom I was drawn first by her Che Guevara wallpaper on her 360 profile and second by a series of pictures she had on her blog there depicting the emotional pain of American soldiers in Iraq.

Even with these two good friends, I didn’t talk, I just listened.  My sole statement about politics was my blast (what would in Facebook be a status message): “People should not be afraid of their governments; governments should be afraid of their people”, then at the bottom of the page, a quote (from myself): “I am a Terran, a citizen of Earth.  The whole world is my home, and all its people my brothers, sisters, and cousins.”  I kept those in their place nearly the entire time I was on Yahoo360, until the spring of 2009 when someone translated them into Farsi for me.

That was when my college graduate friend began expressing hope, being involved with Mir Hossein Moussavi’s campaign for president.  I heard from him only occasionally, and from Atieh (now 18) not much at all because of her intense involvement in the campaign.  From both of them I felt a sense of hope for change, a hope which my other Iranian friends, now no longer silent about politics, society, and culture, expressed.

With them I eagerly anticipated the election.  Watching the election be stolen on 12 June, I felt depressed and robbed.  When media commentators, unaware of the deep levels of discontent across all levels of society in Iran, expressed surprise at the number of demonstrators pouring out into the streets across Iran that evening, my first reaction to them was to shrug my shoulders as if to say, “What did you expect?”.

Then came the harsh crackdowns on the night of 13 June. Now it was no longer shrugging my shoulders, it was “Hey! Those are my friends! Oh my God…”.

For the next couple of weeks, my TV stayed tuned to CNN as I sat at the computer sending out messages of support on Yahoo360 to a growing number of connections and frantically searching out all across the internet for news and information.  Before June 2009, I had heard of Twitter but had no idea what is was.  To me, Youtube was a vehicle for distributing stupid human tricks and music videos.  Facebook was something I had joined to humor a college friend.  Not anymore.

In addition to my activities on Yahoo360, I emailed all the information I could to every Iranian contact in my address book.  Two sources I found particularly reliable were, and still are, Tehran Bureau and the Green Briefs of Josh Shahryar’s “Why We Protest” (now on the Daily Nite Owl).  Upon learning that Yahoo360 would go ahead with its planned closure, I repeatedly warned and gave notice to all my friends on the network and told them to spread the word so that everyone could stay in contact with the outside world.

The rest of the summer, I followed events all day long on a variety of sources. Once Yahoo360 shut down, I began posting to Facebook.  By that time, I was connected through 360 to nearly 75 Iranian friends, most of whom, thankfully, are on Facebook.  Toward the end of my time on 360, I made friends with an upcoming university student who kept me company most of the time I was on the net nearly every day through a chat utility for the rest of the summer, becoming (and has remained) a very dear friend.

Regarding the nuclear issue, as much anti-nuke as I am, I couldn’t care less about it in the situation with Iran.  For both Ahmadi Nejad and the rest of the leaders in the world, it is a chimera, a façade, a St. Elmo’s Fire, shiny car keys jingled to distract the masses.  I don't care about Iran for the U.S., or for the world; I care about Iran for Iran.

*Since writing this back in December 2009, I have discovered that my friend Mehdi, who now uses his first name, Daniel, is alive and well, and living in the United States.