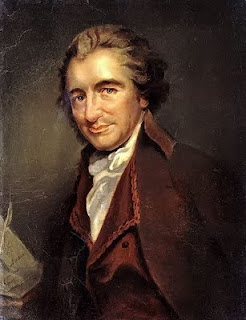 How many of you have seen “National Treasure” or watched the recent HBO miniseries “John Adams”? Were there any of you watching those movies who did not feel at least somewhat awe-inspired, by the declaration that “all men are created equal” and that all have the right to “life, liberty, and the pursuit of happiness” , despite of widely the arrow of reality has missed the bullseye of the ideals at which the Founding Fathers aimed?

Next time you watch, before the euphoria fades away with the remembrance of how much those lofty ideals have been compromised, take heart that one never compromised his ideals, never sought to profit from any of his efforts in the cause of liberty, and defended the rights of others regardless of the fact it nearly cost him his life. I am speaking, of course, about Thomas Paine, author of the 1776 best-seller Common Sense, the pamphlet which sparked the fire which led to the drafting and signing of the Declaration of Independence six months later.

Paine’s first treatise of a political nature was his “The Case Of The Officers Of Excise” written in England in 1772, addressed to Parliament regarding their overwork and underpay, written at the behest of his fellow excise officers; prior employment had been as a privateer. Benjamin Franklin of the American colony of Pennsylvania was one of the people who noticed Paine’s effort and sponsored his emigration to the New World.

Almost immediately Paine became involved in the building political turmoil. His first treatises in America came in the periodical named Pennsylvania Magazine, one of which was the first defense of women’s rights in America, “An Occasional Letter On The Female Sex”, and another the first major attack on slavery in America and the slave trade, “African Slavery In America”. As I pointed out, his Common Sense was the all-time best-seller in colonial America at 620,000 copies here and in the world the first year alone. He donated all royalties to Gen. Washington’s Continental Army. His series of pamphlets entitled “The American Crisis”, the first of which opened: “These are the times which try men’s souls”, were published at cost in order to be more affordable to more people here and in England.

As later noted by Thomas Edison, Paine was an inventor also, and it was in this role, seeking funds for an iron bridge, which brought him back to England in 1787, where he once again became embroiled in the cause of freedom. After a visit to revolutionary France in 1789 at the invitation of his close friend Gilbert du Motier, formerly Marquis de Lafayette, Paine mentored the men who later founded the United Irishmen, United Scotsmen, and similar groups in England, published one of his most influential works, Rights of Man, and ultimately fled the country in 1792 one step ahead of the hangman after publicly calling for a republic in England.

France immediately decreed him a citizen and he proved an influential member of the National Assembly until the Montagnards took over both the Jacobin clubs (of which Paine’s party, the Girondins, were also members) and the Revolution. As a lifelong opponent of the death penalty, Paine strongly protested their planned execution of King Louis XVI and soon found himself in Luxembourg Prison, escaping the guillotine himself only by accident.

In prison Paine wrote his most controversial work of all, The Age of Reason. It is, in fact, largely because of this book, a staunch defense of deism vis-a-vis Christianity, that Paine has so often and so viciously been attacked by his detractors here. It was why Paine was left to languish in prison after the overthrow of the Reign of Terror until James Monroe became Minister to Paris, why he was so vilified in the press upon his return to America at the invitation of Thomas Jefferson in 1802, and why other than the inescapably necessary mention of Common Sense that his role in the War for Independence has been all but obliterated from American history books.

True, Paine could be tactless, though never less than honest, and this earned him many political enemies here and abroad. However, the fact that he has been denied his just due in the country he chose to love before he was even here is one of the greatest shames of our nation.

Thomas Paine is the Father of American Independence, which, in spite of its shortcomings, lit the lamp of freedom which has given hope to countless millions who have struggled for liberty, equality, and justice for all. He not only helped write the constitution of revolutionary France, he inspired republicans in the country of his birth as well as those of Scotland and Ireland—I’m always amused explaining to Irish republican friends why an Englishman is their ideological godfather.

Through his writings against slavery, illiteracy, poverty, and other social evils, as well as for the rights of women, universal suffrage, old-age pensions, guaranteed income, and fair distribution of land, he is an inspiration to socialists, labor union activists, reformers, and revolutionaries through the years and across the world. Most of his suggested improvements for society are now part of the accepted social and political fabric of Europe, if somewhat less so here. He is also considered the “patron saint”, if you will, of freethinkers such as deists like my son and atheists such as myself.

The title of this essay comes from a song of the same name by Gary Moore and sung by Scottish folksinger Dick Gaughan. Unfortunately, neither I nor anyone else can tell you where to go see Tom Paine’s bones. A few years after Paine’s death in 1809, an English agrarian activist named William Corbett dug up Paine’s body from where it had been buried in New York, and took it home with him to England, where he intended a hero’s burial. However, Tom Paine’s bones were still in Corbett’s possession when he died 20 years later, and now they are lost.

The best epitaph for Thomas Paine is that which is written on a plaque on the Rue de l’Odeon in Paris on which he lived in from 1797-1802: “Thomas Paine. English by birth. American by choice. French by decree. Citizen of the world.”

(First written for a speech class at Dalton State College.)

Fariborz, thank you, all three times :) Thomas Paine has always been one of my biggest heroes.