A Message for the Fourth of July 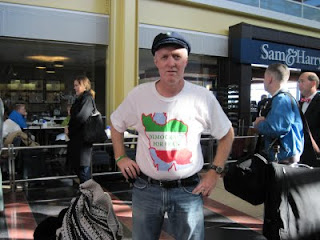 Besides the more personal reasons I previously gave in my essay on the subject entitled “WHY I DO IT: Why I am so involved with Iran issues and the Iranian people” (or in the Persian/Farsi version,
نو يسم؟ چرا من تا اين حد درگير مسائل ايران و مسائل مردم ايران شده ام؟), another reason I am so involved with the Green Movement in Iran is because I believe in America. Not in America as a government, for sure, or even America as a country or even its people. No, the America I believe in is far greater than that because that America is an idea, and ideas are immortal—they cannot be killed or destroyed.

As imperfect as our revolution was and despite what we often find our government doing, 4 July 1776 was the day a group of humans openly declared to the world that all humans are equal and are endowed with inalienable rights that include life, liberty, and the pursuit of happiness. Even if we had far to go to realize those ideals, and still do even before the regression of the past decade, it was still that document which began a wave of subject peoples around the world seizing or attempting to seize for themselves that vision of freedom held aloft like a beacon to which a Frenchman gave form in the latter 18th century.

One of the features of the movement in Iran that gives me such hope is that it is broad-based, pluralistic, tolerant, as ready to reconcile when the time comes as it is to protest, and more grassroots democratic in its methods of operation than any such movement I have seen in my lifetime.

I have been keeping both my eyes on such things since Ninoy Aquino, leader of the opposition to the Marcos regime in the Republic of the Philippines, was assassinated at Manila International Airport in August 1983. He had been returning from three years of exile in the United States and was shot several times while descending the ladder from the airliner which had brought him to the surrounded by officers of the Presidential Security Guard. His murder lead to waves of massive street protests that broke out all across the country. His body lay in state at his home in Quezon City for nine days, unembalmed and with the bullet hole in his head clearly visible.

The funeral was held at St. Domingo Church and he was buried at Manila Memorial Park. Thousands visited the Aquino home to view his body, and the procession to the cemetery from the church was lined by more than two million people, one of the largest gatherings the country had ever seen.

Ninoy’s assassination, the events that followed, and the related unrest mark the beginning of what became known as the Yellow Revolution, from the yellow ribbons his supporters coming to greet him upon his arrival had been carrying at the terminal.

Though the massive street protests died down after a while, the people continued their resistance through nonviolent resistance and civil disobedience, which has a tradition in the Philippines going back to their national hero, Jose Rizal, one of the world’s earliest proponents of using these methods to resist an abusive regime (Rizal was executed by the Spanish colonial government on 30 December 1896).

The movement culminated two-and-a-half years later in the People Power, or EDSA (for Epifanio de los Santos Avenue, where most of the action took place) of February 1986 which resulted primarily from the massive fraud in the snap presidential election earlier in the month by the president, Ferdinand Marcos, against his electoral opponent Cory Aquino, wife of Ninoy.

Where the Green Revolution has begun with a stolen election, the Yellow Revolution ended with an election that was stolen. The two-and-a-half years between Ninoy’s assassination and the nonviolent People Power event, the first of its kind, launched a wave of similar movements and risings that has been advancing and retreating like the tides ever since that time. In fact, that was the way in which the Yellow Revolution itself progressed, leading many observers to posit that its movement was dead after the exhilaration of its initial outburst receded to give itself time to grow and mature.

That may sound familiar to anyone reading the pontifications of a number of pundits about the Green Revolution since February. The movement has neither gone away nor is it slumbering. It is growing and maturing, not as visible now to onlookers now that its outward manifestations have receded, but the movement is like an ocean, always there, and its tide will soon rise again.

What is America, the idea, to me? I cannot do much better than Langston Hughes did in his poem “Let America Be America Again”, which I’ve posted to my Wall and to which I will post a link below. In a nutshell, America, the idea, is about freedom, not for some but for everyone, regardless of age, skin color, ethnicity, nationality, gender, religion (or lack thereof), ideology, sexual orientation, geneaology, socioeconomic status, education, or any characteristic by which humans can be defined.

The America I believe in belongs not just to the inhabitants of the borders of the country bearing that name, certainly not just to its government or to the corporations and financial institutions which control and regulate the lives of its citizens in many ways more so than the government, but to all people. Everyone is invited to the dinner table and the living room. In a paraphrase of a saying that has been passed around the streets during gatherings of the Green Movement, I say, I am an American before I am an atheist, but more importantly I am a human before I am an American. As James Edward Olmos said, there is but one race, the human race. So say we all.

One day we will see a world in which there is freedom, equality, and justice for all, and in which the needs of the many receive more consideration than the avarice and ambition of the few both within individual nation-states and across borders. That is the day that America, the idea, will finally be. On that day, all humans will be able to say to themselves, “I am a Terran, a citizen of Earth. The whole world is my home, and all its people my brothers, sisters, and cousins”, not because they believe but because they know.

(America never was America to me.)

Let America be the dream the dreamers dreamed--
Let it be that great strong land of love
Where never kings connive nor tyrants scheme
That any man be crushed by one above.

(It never was America to me.)

O, let my land be a land where Liberty
Is crowned with no false patriotic wreath,
But opportunity is real, and life is free,
Equality is in the air we breathe.

(There's never been equality for me,
Nor freedom in this "homeland of the free.")

I am the poor white, fooled and pushed apart,
I am the Negro bearing slavery's scars.
I am the red man driven from the land,
I am the immigrant clutching the hope I seek--
And finding only the same old stupid plan
Of dog eat dog, of mighty crush the weak.

I am the young man, full of strength and hope,
Tangled in that ancient endless chain
Of profit, power, gain, of grab the land!
Of grab the gold! Of grab the ways of satisfying need!
Of work the men! Of take the pay!
Of owning everything for one's own greed!

I am the farmer, bondsman to the soil.
I am the worker sold to the machine.
I am the Negro, servant to you all.
I am the people, humble, hungry, mean--
Hungry yet today despite the dream.
Beaten yet today--O, Pioneers!
I am the man who never got ahead,
The poorest worker bartered through the years.

Yet I'm the one who dreamt our basic dream
In the Old World while still a serf of kings,
Who dreamt a dream so strong, so brave, so true,
That even yet its mighty daring sings
In every brick and stone, in every furrow turned
That's made America the land it has become.
O, I'm the man who sailed those early seas
In search of what I meant to be my home--
For I'm the one who left dark Ireland's shore,
And Poland's plain, and England's grassy lea,
And torn from Black Africa's strand I came
To build a "homeland of the free."

O, let America be America again--
The land that never has been yet--
And yet must be--the land where every man is free.
The land that's mine--the poor man's, Indian's, Negro's, ME--
Who made America,
Whose sweat and blood, whose faith and pain,
Whose hand at the foundry, whose plow in the rain,
Must bring back our mighty dream again.

Sure, call me any ugly name you choose--
The steel of freedom does not stain.
From those who live like leeches on the people's lives,
We must take back our land again,
America!

O, yes,
I say it plain,
America never was America to me,
And yet I swear this oath--
America will be!

Out of the rack and ruin of our gangster death,
The rape and rot of graft, and stealth, and lies,
We, the people, must redeem
The land, the mines, the plants, the rivers.
The mountains and the endless plain--
All, all the stretch of these great green states--
And make America again!