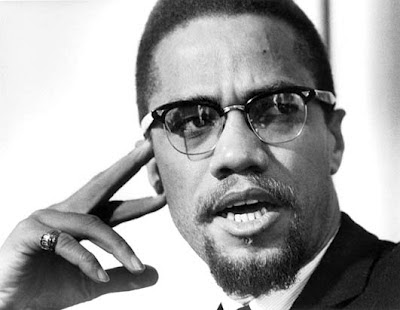 I’ll say one more thing and then I’ll sit down.

Back during slavery, when Black people like me talked to the slaves, they didn't kill 'em, they sent some old house Negro along behind him to undo what he said. You have to read the history of slavery to understand this. There were two kinds of Negroes. There was that old house Negro and the field Negro.

And the house Negro always looked out for his master. When the field Negroes got too much out of line, he held them back in check. He put 'em back on the plantation.

The house Negro could afford to do that because he lived better than the field Negro. He ate better, he dressed better, and he lived in a better house.  He lived right up next to his master - in the attic or the basement.  He ate the same food his master ate and wore his same clothes.  And he could talk just like his master - good diction. And he loved his master more than his master loved himself. That's why he didn't want his master hurt.

That was the house Negro. But then you had some field Negroes, who lived in huts, had nothing to lose. They wore the worst kind of clothes. They ate the worst food. And they caught hell. They felt the sting of the lash. They hated their master. Oh yes, they did. If the master got sick, they'd pray that the master died. If the master's house caught afire, they'd pray for a strong wind to come along. This was the difference between the two.

And today you still have house Negroes and field Negroes. I'm a field Negro.

(This version is from Shabazz's message to the Northern Negro Grass Roots Leadership Conference on 10 November 1963, called Message to the Grassroots, which can be found in its entirety at http://teachingamericanhistory.org/library/index.asp?document=1145.)

To understand this, you have to go back to what [the] young brother here referred to as the house Negro and the field Negro — back during slavery. There was two kinds of slaves.

That was that house Negro. In those days he was called a “house nigger.” And that’s what we call him today, because we’ve still got some house niggers running around here.

And if someone comes to you right now and says, “Let’s separate,” you say the same thing that the house Negro said on the plantation. “What you mean, separate? From America? This good white man? Where you going to get a better job than you get here?” I mean, this is what you say. “I ain’t left nothing in Africa,” that’s what you say. Why, you left your mind in Africa.

On that same plantation, there was the field Negro.

The field Negro — those were the masses.  There were always more Negroes in the field than there was Negroes in the house. The Negro in the field caught hell. He ate leftovers.  In the house they ate high up on the hog.  The Negro in the field didn’t get nothing but what was left of the insides of the hog. They call ‘em “chitt’lin’” nowadays. In those days they called them what they were: guts. That’s what you were — a gut-eater. And some of you all still gut-eaters.

You’ve got field Negroes in America today.  I’m a field Negro.  The masses are the field Negroes.  When they see this man’s house on fire,  you don’t hear these little Negroes talking about “our government is in trouble.”  They say, “The government is in trouble.” Imagine a Negro: “Our government”!  I even heard one say “our astronauts.”  They won’t even let him near the plant — and “our astronauts”!  “Our Navy” — that’s a Negro that’s out of his mind. That’s a Negro that’s out of his mind.

Just as the slave-master of that day used Tom, the house Negro, to keep the field Negroes in check, the same old slave-master today has Negroes who are nothing but modern Uncle Toms, 20th century Uncle Toms, to keep you and me in check, keep us under control, keep us passive and peaceful and nonviolent. That’s Tom making you nonviolent.

It’s like when you go to the dentist, and the man’s going to take your tooth.  You’re going to fight him when he starts pulling. So he squirts some stuff in your jaw called novocain, to make you think they’re not doing anything to you. So you sit there and ’cause you’ve got all of that novocain in your jaw, you suffer peacefully.  Blood running all down your jaw, and you don’t know what’s happening. ‘Cause someone has taught you to suffer — peacefully.
Posted by Chuck Hamilton at 17:43